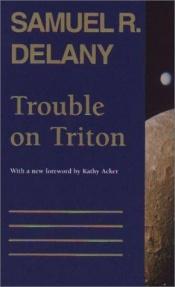 Trouble on Triton: An Ambiguous Heterotopia is a science fiction novel by Samuel R. Delany. It was nominated for the 1976 Nebula Award for Best Novel, and was shortlisted for a retrospective James Tiptree, Jr. Award in 1995. It was originally published under the shorter title Triton.
Delany has said that Trouble on Triton was written partly in dialogue with Ursula K. Le Guin's anarchist science fiction novel The Dispossessed, whose subtitle was An Ambiguous Utopia. It is also loosely linked to several others of his works in its references to "the modular calculus", a vaguely described future mathematics that would analyze analogies, fictional constructs, and possibly human personalities. The most recent edition from Wesleyan University Press has a foreword by the postmodern novelist Kathy Acker, focusing on Trouble on Triton as Orphic fiction.

The Book of Skulls

Lake of the Long Sun

A Stainless Steel Rat Is Born