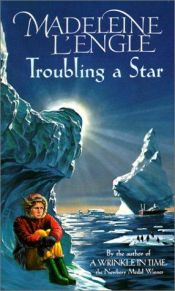 Troubling a Star is the last full length novel in the Austin family series by Madeleine L'Engle. The young adult suspense thriller, published in 1994, reunites L'Engle's most frequent protagonist, Vicky Austin, with Adam Eddington, both of whom become enmeshed in international intrigue as they travel separately to Antarctica. The story takes place several months after the end of A Ring of Endless Light, the novel in which Vicky and Adam first met.
Like several previous books about Vicky Austin, Troubling a Star is told in the first person, with Vicky as the narrator. It begins with Vicky stranded alone on an iceberg off the coast of Antarctica. The novel proceeds to tell in memory flashbacks how Adam's Great Aunt Serena paid for Vicky to visit Adam at Eddington Point in Antarctica, and of the interesting people and unexpected dangers she meets along the way. Despite Vicky's concerns about an apparent cooling in Adam's affection for her, it is established that their everlasting romantic relationship is quite a strong and close one.

Running Out of Time