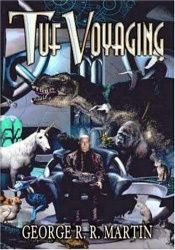 Tuf Voyaging is a 1986 science fiction fix-up novel by George R. R. Martin, first published in hardcover by Baen Books. It is a darkly comic meditation on environmentalism and absolute power. Martin cited fantasy fiction and science fiction Grand Master Jack Vance as having a large influence on his Haviland Tuf stories, Martin going so far as trying to emulate Vance's writing style in most of them.
This novel is a collection of related short fiction works, originally published over several years, beginning with 1976's "A Beast for Norn." The book includes a prologue and Martin's S'uthlam story line, adding them as bridging material, and gathering them with other Tuf stories into one episodic novel.
The novel concerns the adventures of Haviland Tuf, an exceptionally tall, bald, very pale, overweight, phlegmatic, vegetarian, cat-loving but otherwise solitary space trader. Due to the venality and cutthroat tactics of the party chartering his one-man trading vessel, Tuf inadvertently becomes master of Ark, an ancient, 30-kilometer-long "seedship", a very powerful warship with advanced ecological engineering capabilities.

This book can be a bit hard to get into. That being from the fact that the different sections were originally published as short stories in separate times and places. But I totally love this book. The concept is interesting and original. Martin is known more for his fantasy work but his sci-fi is just as good.