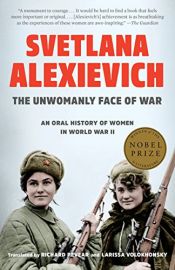 For more than three decades, Svetlana Alexievich has been the memory and conscience of the twentieth century. When the Swedish Academy awarded her the Nobel Prize, it cited her invention of “a new kind of literary genre,” describing her work as “a history of emotions . . . a history of the soul.”

In The Unwomanly Face of War, Alexievich chronicles the experiences of the Soviet women who fought on the front lines, on the home front, and in the occupied territories. These women—more than a million in total—were nurses and doctors, pilots, tank drivers, machine-gunners, and snipers. They battled alongside men, and yet, after the victory, their efforts and sacrifices were forgotten.

Alexievich traveled thousands of miles and visited more than a hundred towns to record these women’s stories. Together, this symphony of voices reveals a different aspect of the war—the everyday details of life in combat left out of the official histories.

Translated by the renowned Richard Pevear and Larissa Volokhonsky, The Unwomanly Face of War is a powerful and poignant account of the central conflict of the twentieth century, a kaleidoscopic portrait of the human side of war.

THE WINNER OF THE NOBEL PRIZE IN LITERATURE
“for her polyphonic writings, a monument to suffering and courage in our time.”

“A landmark.”—Timothy Snyder, author of On Tyranny: Twenty Lessons from the Twentieth Century

“An astonishing book, harrowing and life-affirming . . . It deserves the widest possible readership.”—Paula Hawkins, author of The Girl on the Train

“Alexievich has gained probably the world’s deepest, most eloquent understanding of the post-Soviet condition. . . . [She] has consistently chronicled that which has been intentionally forgotten.”—Masha Gessen, National Book Award–winning author of The Future Is History

Lilla's Feast: One Woman's True Story of Love and W …

The wages of guilt

The Amber Room: The Fate of the World's Greatest Lo …

The Secret Holocaust Diaries: The untold story of N …

The secret history of the Mongol queens : how the d …

The Ordeal of Elizabeth Marsh