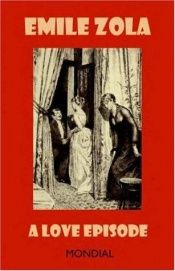 Une page d'amour is the eighth novel in the Rougon-Macquart series by Émile Zola, set among the petite bourgeoisie in Second Empire suburban Paris. It was first serialized between December 11, 1877, and April 4, 1878, in Le Bien public, before being published in novel form by Charpentier in April 1878.
The central character of the novel is Hélène Grandjean née Mouret, first introduced briefly in La fortune des Rougon. Hélène is the daughter of Ursule Mouret née Macquart, the illegitimate daughter of Adelaïde Fouque, the ancestress of the Rougon-Macquart family. Hélène's brothers are François Mouret, the central character of La conquête de Plassans, and Silvère Mouret, whose story is told in La fortune des Rougon.