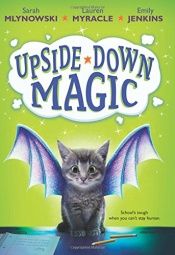 From New York Times bestselling authors Sarah Mlynowski, Lauren Myracle, and Emily Jenkins comes a new, offbeat series about a group of misfits who set out to prove that life on the other side of ordinary has its charms.

For Nory, this means that instead of being able to turn into a dragon or a kitten, she turns into both of them at the same time—a dritten.

For Elliott, the simple act of conjuring fire from his fingertips turns into a fully frozen failure.

For Andres, wonky magic means he’s always floating in the air, bouncing off the walls, or sitting on the ceiling.

For Bax, a bad moment of magic will turn him into a . . . actually, he’d rather not talk about that.

Nory, Elliott, Andres, and Bax are just four of the students in Dunwiddle Magic School’s Upside-Down Magic class. In their classroom, lessons are unconventional, students are unpredictable, and magic has a tendency to turn wonky at the worst possible moments. Because it’s always amazing, the trouble a little wonky magic can cause . . .

The Girl With the Silver Eyes

The girl in the castle inside the museum

The Book of Lies