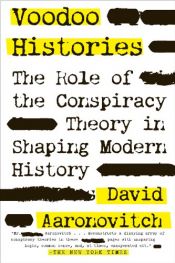 Voodoo histories : The role of the conspiracy theory in shaping modern history

"Meticulous in its research, forensic in its reasoning, robust in its argument, and often hilarious in its debunking... a highly entertaining rumble with the century's major conspiracy theorists and their theories." --John Lahr, National Book Critics Circle Award-winning author of Tennessee Williams

From an award-winning journalist, a history so funny, so true, so scary, it's bound to be called a conspiracy.

Our age is obsessed by the idea of conspiracy. We see it everywhere- from Pearl Harbor to 9/11, from the assassination of Kennedy to the death of Diana. In this age of terrorism we live in, the role of conspiracy is a serious one, one that can fuel radical or fringe elements to violence.

For David Aaronovitch, there came a time when he started to see a pattern among these inflammatory theories. these theories used similarly murky methods with which to insinu­ate their claims: they linked themselves to the supposed conspiracies of the past (it happened then so it can happen now); they carefully manipulated their evidence to hide its holes; they relied on the authority of dubious aca­demic sources. Most important, they elevated their believers to membership of an elite- a group of people able to see beyond lies to a higher reality. But why believe something that entails stretching the bounds of probabil­ity so far?

In this entertaining and enlightening book, he examines why people believe conspiracy theories, and makes an argument for a true skepticism: one based on a thorough knowledge of history and a strong dose of common sense.

The Age of American Unreason

The Revolt of the Masses

The Metaphysical Club: A Story of Ideas in America

The Rise and Fall of Ancient Egypt

The Emperor of All Maladies

The Message of the Sphinx

The Story of Philosophy