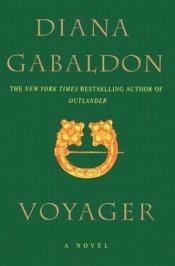 Voyager is the third book in the Outlander series of novels by Diana Gabaldon. Centered on time travelling 20th-century nurse Claire Randall and her 18th-century Scottish Highland warrior husband Jamie Fraser, the books contain elements of historical fiction, romance, adventure and science fiction/fantasy.
The heroine of the bestselling Outlander, Claire, returns in Voyager as a mother to Brianna Randall and living in Boston in the year 1968. The preceding novel, Dragonfly in Amber, ended with Claire and Brianna coming to grips with the truth of the identity of Brianna's real father, Jamie Fraser, and Claire's travel through time. In Voyager, Claire and Brianna trace Jamie's life since the battle of Culloden during the Jacobite rising of 1745. Discovering Jamie survived the massacre that heralded the destruction of many clans in Scotland sends Claire back to the stone circle that first hurtled her through time - twenty years before.