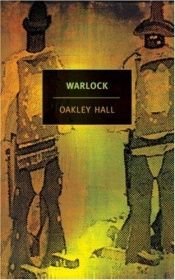 Warlock is an American western novel by author Oakley Hall, first published in 1958.
The novel is loosely based on characters and events that took place in the OK Corral in Tombstone, Arizona.
Hall's most famous novel, Warlock was a finalist for the Pulitzer Prize in 1958. Writer Thomas Pynchon praised it for restoring "to the myth of Tombstone its full, mortal, blooded humanity" and showing "that what is called society, with its law and order, is as frail, as precarious, as flesh and can be snuffed out and assimilated into the desert as easily as a corpse can. It is the deep sensitivity to abysses that makes Warlock one of our best American novels."
In 1959, it was made into a film, also called Warlock, starring Henry Fonda, Richard Widmark, and Anthony Quinn.
Hall's 1978 novel The Bad Lands and 1986 novel Apaches are sequels to Warlock. The three together form the Legends West trilogy.