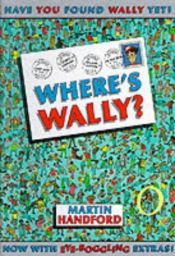 Where's Wally?, published in the United States and Canada as Where's Waldo?, is the title of the first book in the Where's Wally? series, published in 1987. In the book, Wally travels to everyday places, where he sends postcards to the reader, and the reader must locate Wally in the postcard. The book became an instant best-seller. Where's Wally? was re-released in October 1997 in a special 10th anniversary edition form. The location of Wally was changed in each picture and additional characters were added for the reader to find.
The Wally series is quite evocative of an earlier children's book titled "Where's Wallace?", in which a red-headed orangutan escapes from the zoo and "hides" in highly detailed picture panoramas, including beach, department store, circus, stadium, and museum

Molly Moon, Micky Minus and the Mind Machine

Where the forest meets the sea

The Case of the Left-Handed Lady

The Case of the Bizarre Bouquets: An Enola Holmes M …