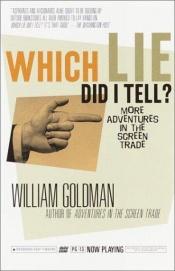 Which Lie Did I Tell?: More Adventures in the Screen Trade is a work of non-fiction first published in 2000 by novelist and screenwriter William Goldman. It is the follow-up to his 1982 book Adventures in the Screen Trade.
Originally to be called The Big Campfire, the inspiration for the title came when Goldman was in the office of a Hollywood producer who was talking on the phone to one of his associates. Suddenly he cupped his hands over the receiver, snapped his fingers and said “Bill, Bill! Which lie did I tell?”