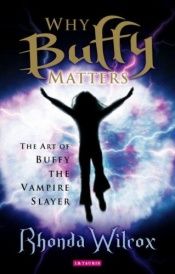 Why Buffy Matters: The Art Of Buffy the Vampire Slayer

Rhonda Wilcox is the world's foremost authority on Buffy the Vampire Slayer, its characters, and its themes. Wilcox argues that Buffy is enduring as art by exploring its excellence in both long-term story arc construction and in producing individual episodes that are powerful on their own. She examines the larger patterns that extend through all seven seasons: the hero myth, imagery of light, naming symbolism, Buffy's relationship with Spike, sex, and redemption. Wilcox also focuses on acclaimed and noteworthy episodes, including the musical *Once More, with Feeling,* the largely silent and wordless *Hush,* and the dream episode *Restless.* She examines Buffy's literary narrative, symbolism, visual imagery, and sound. Combining great intelligence and wit, written for fans, this is the worthy companion to the show that has claimed and kept the minds and hearts of watchers worldwide.

Dawn of the Dumb: dispatches from the idiotic front …

The Call of the Weird: Travels in American Subcultu …

The Complete X-Files: Behind the Scenes, the Myths, …

The Simpsons and Their Mathematical Secrets