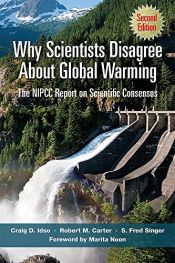 Why Scientists Disagree About Global Warming: The NIPCC Report on Scientific Consensus

"Probably the most widely repeated claim in the debate over global warming is that 97% of scientists agree that climate change is man-made and dangerous, the authors write. This claim is not only false, but its presence in the debate is an insult to science."

With these words, the authors begin a detailed analysis of one of the most controversial topics of the day. The authors make a compelling case against claims of a scientific consensus. The purported proof of such a consensus consists of sloppy research by nonscientists, college students, and a highly partisan Australian blogger. Surveys of climate scientists, even those heavily biased in favor of climate alarmism, find extensive disagreement on the underlying science and doubts about its reliability.

The authors point to four reasons why scientists disagree about global warming: a conflict among scientists in different and often competing disciplines; fundamental scientific uncertainties concerning how the global climate responds to the human presence; failure of the United Nations Intergovernmental Panel on Climate Change (IPCC) to provide objective guidance to the complex science; and bias among researchers.

The authors offer a succinct summary of the real science of climate change based on their previously published comprehensive review of climate science in a volume titled Climate Change Reconsidered II: Physical Science. They recommend that policymakers resist pressure from lobby groups to silence scientists who question the authority of the IPCC to claim to speak for climate science.

More than 50,000 copies of the first edition were sold or given away in five months to elected officials, civic and business leaders, scientists, and other opinion leaders. The response from the science community and experts on climate change has been overwhelmingly positive.

To meet demand for more copies, we have produced this second revised edition. Changes include a foreword by Marita Noon, at the time executive director of Energy Makes America Great, Inc. Some of the discussion in Chapter 1 has been revised and expanded thanks to feedback from readers of the first edition. Graphs in Chapters 4, 5, and 6 are now full color, and new graphs have been added.