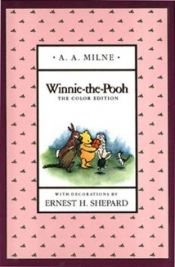 fiction by A. A. Milne

Winnie-the-Pooh is the first volume of stories about Winnie-the-Pooh, by A. A. Milne. It is followed by The House at Pooh Corner. The book focuses on the adventures of a teddy bear called Winnie-the-Pooh and his friends Piglet, a small toy pig; Eeyore, a toy donkey; Owl, a live owl; and Rabbit, a live rabbit. The characters of Kanga, a toy kangaroo, and her son Roo are introduced later in the book, in the chapter entitled "In Which Kanga and Baby Roo Come to the Forest and Piglet has a Bath." The bouncy toy-tiger character of Tigger is not introduced until the sequel, The House at Pooh Corner.
Portions of the book were adapted from previously published stories. The first chapter, for instance, was adapted from "The Wrong Sort of Bees", a story published in the London Evening News in its issue for Christmas Eve 1925. The chapters in the book can be read independently of each other, as they are episodic in nature and plots do not carry over from one chapter to the next. In 2003, Winnie the Pooh was listed at number 7 on the BBC's survey The Big Read.

The house at Pooh Corner

The Tale of Peter Rabbit