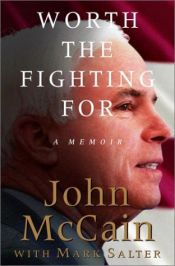 Worth the Fighting For

Worth the Fighting For is a 2002 book by United States Senator John McCain with Mark Salter. Published by Random House, it is part autobiography, part mini-biographies of others.
The book picks up where McCain's first memoir, Faith of My Fathers, left off, with his return to the United States following his release as a prisoner of war in North Vietnam. The first part briefly covers the balance of his final years in the Navy until his 1981 retirement. The second part covers in more detail of his congressional career, first in the House of Representatives and later in the Senate. It concludes with his unsuccessful 2000 presidential campaign and some mentions of the September 11, 2001 attacks.
Interspersed with the autobiographical content are extended vignettes of various figures whom McCain has been inspired by, with treatments sometimes up to ten or more pages in length. These subjects range from historical presences such as Theodore Roosevelt, to more contemporaneous politicians such as Barry Goldwater, Scoop Jackson and Mo Udall, to people in other fields such as Billy Mitchell and Ted Williams. A few fictional creations, such as Marlon Brando's performance in Viva Zapata!

Faith of My Fathers: A Family Memoir

Notes from a Big Country

The Curse of Lono

Searching for God Knows What

Look Me in the Eye: My Life with Asperger's