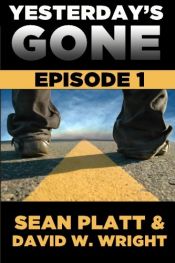 *NOTE: THE FULL SEASON - ALL SIX EPISODES ARE NOW AVAILABLE FOR $5.99 amazon.com/Yesterdays-Gone-Season-One-ebook/dp/B005REXCKE/or get Seasons One AND Two for just $9.99 at amazon.com/dp/B00A73I1GA/

The post-apocalyptic series with more than 400 5 Star Reviews, Yesterday's Gone is serialized fiction at its most thrilling, most cliffhanger-y, and most WTF?!

A journalist wanders the horrible reality of an empty New York in search of his wife and son.

A serial killer must hunt in a land where prey is now an endangered species.

A mother shields her young daughter from danger, though every breath fills her with terror.

A bullied teen is thrilled to find everyone gone. Until the knock at the door.

A fugitive survives a fiery plane crash. Will he be redeemed, or return to what he's best at: the kill?

An eight year old boy sets out on a journey to find his missing family. What he finds will change him forever.

And there's a few people who aren't surprised that this happened at all. In fact, they've been dreaming about this day for years.

Someone or something is watching them.

Will humanity survive what it never saw coming?

The only certainty is that Yesterday's Gone.

WARNING: This is a post-apocalyptic horror book where bad people do evil things, and as such, this series features disturbing scenes and foul language. While it is all within the context of the story, some readers may find this content offensive.

Prayers to broken stones; a collection