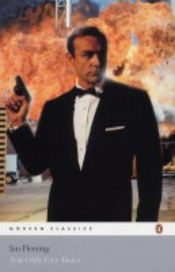 You Only Live Twice is the eleventh novel in Ian Fleming's James Bond series of stories. It was first published by Jonathan Cape in the United Kingdom on 26 March 1964 and sold out quickly. The book holds the distinction of being the last novel by Fleming to be published in his lifetime, with subsequent works being published posthumously. You Only Live Twice is the concluding chapter in what is known as the "Blofeld Trilogy".
The story starts eight months after the murder of Tracy Bond, which occurred at the end of the previous novel, On Her Majesty's Secret Service. James Bond is drinking and gambling heavily and making mistakes on his assignments when, as a last resort, he is sent to Japan on a semi-diplomatic mission. Whilst there he is challenged by the Head of the Japanese Secret Service to kill Dr. Guntram Shatterhand. Bond realises that Shatterhand is Ernst Stavro Blofeld and sets out on a revenge mission to kill him and his wife, Irma Bunt.
The novel deals on a personal level with the change in Bond from a depressed man in mourning, to a man of action bent on revenge, to an amnesiac living as a Japanese fisherman.