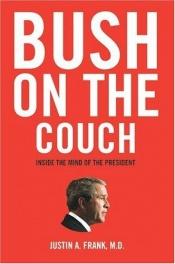 Bush on the Couch: Inside the Mind of the President is a 2004 book by psychoanalyst Justin A. Frank. The central premise of Frank's book is that President George W. Bush displays signs of poor mental health which makes him ill-suited to rule the United States. Frank suggests Bush suffers from megalomania, that he is probably incapable of true compassion and shows signs of sadism, and that as an untreated alcoholic, is in constant danger of a relapse. Further, in Frank's opinion, Bush manifests the symptoms of a "dry drunk", principally irritability, judgmentalism and a rigid, inflexible world view. Frank also analyses, among other things, Bush’s tendency to mix up his metaphors and concludes Bush has substantial problems with abstract, flexible thinking.
An updated version of the book was released in October 2007, including a new introduction and a new afterword.

Against All Enemies: Inside America's War on Terror

Rebel in Chief: Inside the Bold and Controversial P …

What Happened: Inside the Bush White House and Wash …

Family: The Real Story of the Bush Dynasty