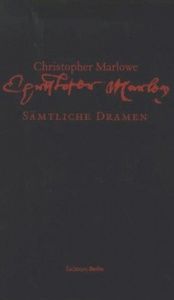 The complete plays of Christopher Marlowe, in which the lure of dark forces drives the shifting balances between weak and strong, sacred and profane