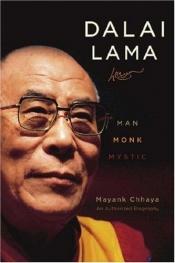 Written with the full cooperation of the Dalai Lama, this fascinating, up-to-date biography at once captures the public persona and enduring mystery behind one of the world’s most important spiritual leaders.

In 1997, the Indian journalist Mayank Chhaya was authorized by the Dalai Lama to write about his life and times. The only authorized biographer who is not a Buddhist, Chhaya conducted more than a dozen personal interviews with the Dalai Lama in McLeod Ganj in India’s Himalayan north, home to Tibet’s government-in-exile. In Dalai Lama: Man, Monk, Mystic he presents an in-depth, insightful portrait of a figure of perennial interest to people all over the world.
Chhaya writes about Tibet and the Buddhist tradition from which the Dalai Lama emerged, helping readers understand the context that shaped his beliefs, politics, and ideals. Adding depth and nuance to his portrait, Chhaya depicts the Dalai Lama in the light of his life in exile and the various roles he has had to assume for his followers. He sheds light on the highly complex conflict between China and Tibet, and offers insights into the growing discontent among young Tibetans who are frustrated with the nonviolent approach to Chinese occupation that the Dalai Lama advocates.

A balanced, informative view of the Dalai Lama and his work, this biography is both a compelling profile of a remarkable spiritual leader and his mission, and an engaging look at how the current unrest in his country will affect its future.

Escape from the Land of Snows: The Young Dalai Lama …

It's Up to You: The Practice of Self-Reflection on …