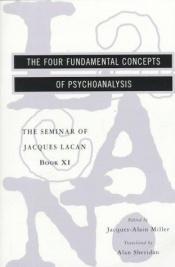 The Four Fundamental Concepts of Psychoanalysis is the 1978 English-language translation of published in Paris by Le Seuil in 1973. The text of the Seminar, which was held by Jacques Lacan at the École Normale Supérieure in Paris between January and June 1964 and is the eleventh in the series, was established by Jacques-Alain Miller.
In January 1963, Serge Leclaire succeeds Lacan as president of the S.F.P.. In May, envoys from the I.P.A visit Paris and meet with Leclaire. Not only they express doubts about Lacan's attitude towards Freud, they also claim that Lacan manipulates transference through the short session: he must be excluded from the training courses. At the Congress of Stockholm, in July, the I.P.A. votes an ultimatum: within three months Lacan's name has to be crossed off the list of didacticians. Two weeks before the expiration of the deadline fixed by the I.P.A., a motion is called for Lacan's name to be removed from the list of training analysts. On November 19 a general meeting has to make a final decision on I.P.A.'s conditions regarding Lacan. Lacan then writes a letter to Leclaire announcing he will not attend the meeting because he can foresee the disavowal.

On kissing, tickling, and being bored

Exploring the World of Lucid Dreaming