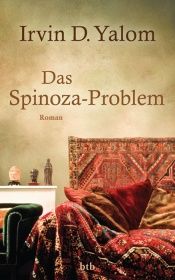 When sixteen-year-old Alfred Rosenberg is called into his headmaster’s office for anti-Semitic remarks he made during a school speech, he is forced, as punishment, to memorize passages about Spinoza from the autobiography of the German poet Goethe. Rosenberg is stunned to discover that Goethe, his idol, was a great admirer of the Jewish seventeenth-century philosopher Baruch Spinoza. Long after graduation, Rosenberg remains haunted by this “Spinoza problem”: how could the German genius Goethe have been inspired by a member of a race Rosenberg considers so inferior to his own, a race he was determined to destroy?

Spinoza himself was no stranger to punishment during his lifetime. Because of his unorthodox religious views, he was excommunicated from the Amsterdam Jewish community in 1656, at the age of twenty-four, and banished from the only world he had ever known. Though his life was short and he lived without means in great isolation, he nonetheless produced works that changed the course of history. Over the years, Rosenberg rose through the ranks to become an outspoken Nazi ideologue, a faithful servant of Hitler, and the main author of racial policy for the Third Reich. Still, his Spinoza obsession lingered. By imagining the unexpected intersection of Spinoza’s life with Rosenberg’s, internationally bestselling novelist Irvin D. Yalom explores the mindsets of two men separated by 300 years. Using his skills as a psychiatrist, he explores the inner lives of Spinoza, the saintly secular philosopher, and of Rosenberg, the godless mass murderer.

The Secret Holocaust Diaries: The untold story of N …