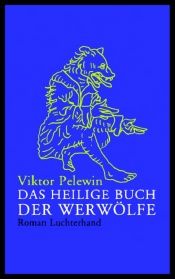 One of the most progressive writers at work today, Victor Pelevin?s comic inventiveness has won him comparisons to Kafka, Calvino, and Gogol, and Time has described him as a ?psychedelic Nabokov for the cyberage.? In The Sacred Book of the Werewolf, a smash success in Russia and Pelevin?s first novel in six years, paranormal meets transcendental with a splash of satire as A Hu-Li, a two-thousand-year-old shape-shifting werefox from ancient China meets her match in Alexander, a Wagner-addicted werewolf who?s the key figure in Russia?s Big Oil. Both a supernatural love story and an outrageously funny send-up of modern Russia, this stunning and ingenious work of the imagination is the sharpest novel to date from Russia?s most gifted literary malcontent.