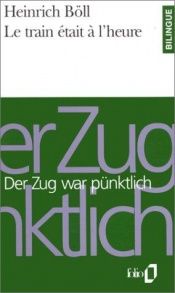 Heinrich Böll’s taut and haunting first novel tells the story of twenty-four-year-old Private Andreas as he journeys on a troop train across the German countryside to the Eastern front. Trapped, he knows that Hitler has already lost the war ... yet he is suddenly galvanized by the thought that he is on the way to his death.

As the train hurtles on, he riffs through prayers and memories, talks with other soldiers about what they’ve been through, and gazes desperately out the window at his country racing away. With mounting suspense, Andreas is gripped by one thought over all: Is there a way to defy his fate?