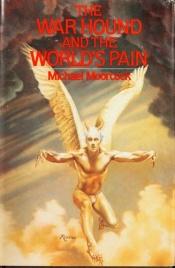 The War Hound and the World's Pain is a 1981 fantasy novel by Michael Moorcock, the first of the "von Bek" series of novels.
The book is set in Europe ravaged by the Thirty Years' War. Its hero Ulrich von Bek is a mercenary and freethinker, who finds himself a damned soul in a castle owned by Lucifer. Much to his surprise, von Bek is charged by Lucifer with doing God's work, by finding the Holy Grail, the "cure for the world's pain," that will also cure Lucifer's pain by reconciling him with God. Only through doing this can von Bek save his soul.
After many adventures, von Bek eventually finds the Holy Grail, and discovers that it will set mankind on the path to self-redemption through rationality, without the help of God or the hindrance of Lucifer.

The Hollowing: A Novel Of The Mythago Cycle