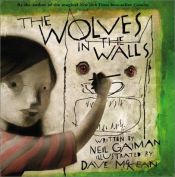 The Wolves in the Walls is a book by Neil Gaiman and Dave McKean, published in 2003, in the United States by HarperCollins, and in the United Kingdom by Bloomsbury. The book was highly praised on release, winning three awards for that year. In 2006, it was made into a musical which toured the UK and visited the US in 2007.
Neil Gaiman has said the story was inspired by a nightmare his daughter Maddy, then aged 4, had that there were wolves in the walls. In the story the protagonist, Lucy, hears wolves in the walls of her family's house, but her family does not believe her until one day when the wolves come out of the walls. The book is notable for Dave McKean's art, which utilises many different techniques, including photography, computer-generated imagery and drawing to achieve its effect.
It is also available in Spanish,German and Italian.