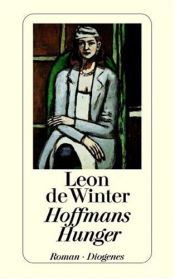 Felix Hoffman's hunger is both physical and emotional. A Dutch diplomat with a checkered career behind him, he is now Ambassador in Prague in the late 1980s; his final posting. In Kafka's haunted city, Hoffman desperately feeds his bulimia and spends his insomniac nights studying Spinoza and revisiting the traumas of his past.

A child survivor of the Holocaust, Hoffman married and had beloved twin daughters, but a double tragedy has befallen his family; one daughter died as a young girl of leukemia, the other, who became a heroin addict, has committed suicide. This has wrecked Hoffman's marriage and his life; he has not had one decent night's sleep since the death of his daughter over twenty years ago, and his constant physical hunger reflects his emotional hunger for truth and understanding. When Carla, a Czech double agent, gets into Hoffman's bed, political and emotional mayhem ensues.

Hoffman's past and his present predicament are inextricably bound up with the tormented history of Europe over the fifty years since the Second World War. Like Europe, he is at a crossroads, and the signs point to an uncertain future. With this spellbinding philosophical thriller, a bestseller in Germany, Leon de Winter charts a search for identity which is both personal and political.