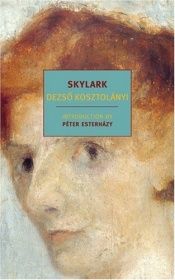 It is 1900, give or take a few years. The Vajkays—call them Mother and Father—live in Sárszeg, a dead-end burg in the provincial heart of the Austro-Hungarian Empire. Father retired some years ago to devote his days to genealogical research and quaint questions of heraldry. Mother keeps house. Both are utterly enthralled with their daughter, Skylark. Unintelligent, unimaginative, unattractive, and unmarried, Skylark cooks and sews for her parents and anchors the unremitting tedium of their lives.

Now Skylark is going away, for one week only, it’s true, but a week that yawns endlessly for her parents. What will they do? Before they know it, they are eating at restaurants, reconnecting with old friends, attending the theater. And this is just a prelude to Father’s night out at the Panther Club, about which the less said the better. Drunk, in the light of dawn Father surprises himself and Mother with his true, buried, unspeakable feelings about Skylark.

Then, Skylark is back. Is there a world beyond the daily grind and life's creeping disappointments? Kosztolányi’s crystalline prose, perfect comic timing, and profound human sympathy conjure up a tantalizing beauty that lies on the far side of the irredeemably ordinary. To that extent, Skylark is nothing less than a magical book.

Looking for Salvation at the Dairy Queen

Both Ways is the Only Way I Want It