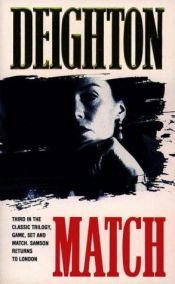 London Match is a 1985 spy novel by Len Deighton. It is the concluding novel in the first of three trilogies about Bernard Samson, a middle-aged and somewhat jaded intelligence officer working for the British Secret Intelligence Service. London Match is part of the Game, Set and Match trilogy, being preceded by Berlin Game and Mexico Set. This trilogy is followed by the Hook, Line and Sinker trilogy and the final Faith, Hope and Charity trilogy. Deighton's novel Winter is a prequel to the nine novels, covering the years 1900-1945 and providing the backstory to some of the characters.
London Match concludes the story that began with Berlin Game, where Bernard Samson's wife Fiona was unmasked as a KGB double agent and was forced into defecting, and that was continued in Mexico Set, where Bernard Samson assisted the defection of Erich Stinnes, his KGB opposite number.