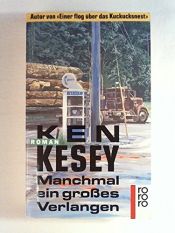 Sometimes a Great Notion is Ken Kesey's second novel, published in 1964. While One Flew Over the Cuckoo's Nest is arguably more famous, many critics consider Sometimes a Great Notion Kesey's magnum opus. The story involves an Oregon family of gyppo loggers who cut and procure trees for a local mill in opposition to striking, unionized workers.
Kesey took the title from the song “Goodnight, Irene”, popularized by Lead Belly.
Sometimes I lives in the country
Sometimes I lives in town
Sometimes I take a great notion
To jump into the river an’ drown

Tief wie der Ozean - The Deep End of the Ocean