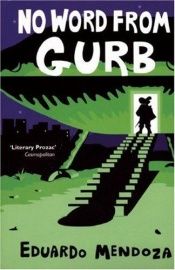 No Word from Gurb was written by Spanish writer Eduardo Mendoza and published as a novel in 1990. However, it originally appeared in the Spanish national newspaper El País in regular installments.
The story is about an alien who is lost in Barcelona whilst in search of his friend Gurb. Through taking on the appearances of various people, including the famous Spanish singer Marta Sánchez, he explores the city observing human life. The book is in the style of a diary, so the reader is taken day by day along the same journey with the alien, as he discovers more and more about the human race.
The story begins with the narrator talking about his ideas and aims of travelling to Earth and adapting to the lifestyle there. Through writing this book, Mendoza captures an image of Barcelona as it is preparing for the Olympics in 1992. The atmosphere at that time, along with the chaos and absurdities of modern human life, are among the subjects that are focused on in this satirical novel. As a parody, "No Word from Gurb" depicts the day to day life of the city from the perspective of an alien.