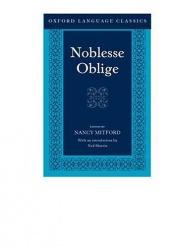 Noblesse Oblige: An Enquiry Into the Identifiable Characteristics of the English Aristocracy is a book that purports to be edited by Nancy Mitford, illustrated by Osbert Lancaster, caricaturist of English manners, and published by Hamish Hamilton. The anthology comprises four brief essays by Nancy Mitford, Alan S. C. Ross, “Strix” and Christopher Sykes, a letter by Evelyn Waugh, and a poem written by John Betjeman.
Until Nancy Mitford wrote “The English Aristocracy” in an article published in 1955, England was blissfully unconscious of U-Usage. Her article sparked off a public debate, whose counterblasts are collected in this book, published one year later. Although the subtitle rather dryly suggests it as an enquiry into the identifying characteristics of members of the English upper-class, it is really more of a debate, with each essayist entertaining and convincing.

Cultural Amnesia: Notes in the Margin of My Time

The Legend of Sleepy Hollow and Other Tales (The Wo …

Notes of a Native Son

The Language of the Night