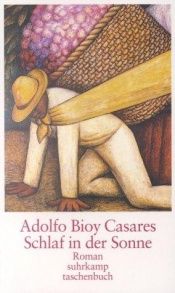 Lucio, a normal man in a normal (nosy) city neighborhood with normal problems with his in-laws (ever-present) and job (he lost it) finds he has a new problem on his hands: his beloved wife, Diana. She’s been staying out till all hours of the night and grows more disagreeable by the day. Should Lucio have Diana committed to the Psychiatric Institute, as her friend the dog trainer suggests? Before Lucio can even make up his mind, Diana is carted away by the mysterious head of the institute. Never mind, Diana’s sister, who looks just like Diana—and yet is nothing like her—has moved in. And on the recommendation of the dog trainer, Lucio acquires an adoring German shepherd, also named Diana. Then one glorious day, Diana returns, affectionate and pleasant. She’s been cured!—but have the doctors at the institute gone too far?

Asleep in the Sun is the great work of the Argentine master Adolfo Bioy Casares's later years. Like his legendary Invention of Morel, it is an intoxicating mixture of fantasy, sly humor, and menace. Whether read as a fable of modern politics, a meditation on the elusive parameters of the self, or a most unusual love story, Bioy's book is an almost scarily perfect comic turn, as well as a pure delight.