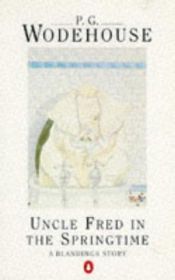 Uncle Fred in the Springtime is a novel by P. G. Wodehouse, first published in the United States on 18 August 1939 by Doubleday, Doran, New York, and in the United Kingdom on 25 August 1939 by Herbert Jenkins, London.
It is set at the idyllic Blandings Castle, home of Clarence, Earl of Emsworth, the fifth full-length novel to be set there. It also features Uncle Fred, who first appeared in the short story "Uncle Fred Flits By", which was included in the 1936 collection Young Men in Spats, and would feature in three further novels.