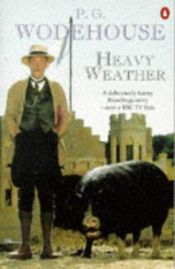 Heavy Weather is a novel by P. G. Wodehouse, first published in the United States on 28 July 1933 by Little, Brown and Company, Boston, and in the United Kingdom on 10 August 1933 by Herbert Jenkins, London. It had been serialised in the Saturday Evening Post from 27 May to 15 July 1933.
It is part of the Blandings Castle series of tales, the fourth full-length novel to be set there, and forms a direct sequel to Summer Lightning, with many of the same characters remaining at the castle from the previous story. It also features the re-appearance by Lord Tilbury, who had previously appeared in Bill the Conqueror and Sam the Sudden.