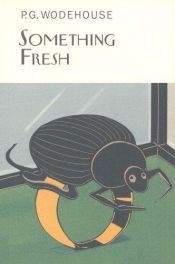 Something Fresh is a novel by P. G. Wodehouse. It was first published as a book in the United States, by D. Appleton & Company on 3 September 1915, under the title Something New, having previously appeared under that title as a serial in the Saturday Evening Post between 26 June and 14 August 1915. It was published in the United Kingdom by Methuen & Co. on 16 September 1915.
The novel introduces Lord Emsworth of Blandings Castle, whose home and family reappear in many of Wodehouse's later short stories and novels; in a new preface added to Something Fresh in 1969, Wodehouse dubbed this series of stories "the Blandings Castle Saga".