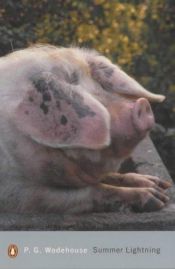 Summer Lightning is a novel by P. G. Wodehouse, first published in the United States on 1 July 1929 by Doubleday, Doran, New York, under the title Fish Preferred, and in the United Kingdom on 19 July 1929 by Herbert Jenkins, London. It was serialised in The Pall Mall Magazine between March and August 1929 and in Collier's from 6 April to 22 June 1929.
It forms part of the Blandings Castle saga, being the third full-length novel to be set there, after Something Fresh and Leave It to Psmith. Heavy Weather forms a semi-sequel to the story, with many of the same characters involved.