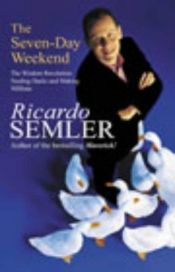 Ricardo Semler thinks that companies ought to put employee freedom and satisfaction ahead of corporate goals.

Imagine a company where employees set their own hours; where there are no offices, no job titles, no business plans; where employees get to endorse or veto any new venture; where kids are encouraged to run the halls; and where the CEO lets other people make nearly all the decisions. This company—Semco—actually exists, and despite a seeming recipe for chaos, its revenues have grown from $35 million to $160 million in the last six years. It has virtually no staff turnover, and there are no signs that its growth will stop any time soon.

How did Semco become wildly successful despite breaking many of the commonly accepted laws of business? In The Seven-Day Weekend, Ricardo Semler shows that for those willing to take a chance, there is a better way to run a workplace. He explains how the technology that was supposed to make life easier—laptops, cell phones, e-mail, pagers—has in fact stolen free time and destroyed the traditional nine-to-five workday. But this can be a good thing—if you have the freedom to get your job done on your own terms and to blend your work life and personal life with enthusiasm and creative energy. Smart bosses will eventually realize that you might be most productive if you work on Sunday afternoon, play golf on Monday morning, go to a movie on Tuesday afternoon, and watch your child play soccer on Thursday.

This is a radical book that will challenge the business world to make the seven-day weekend a reality.

Execution: the Discipline of Getting Things Done

The Virtual Corporation structuring and revitalizin …

Everything You Know About Business is Wrong: How to …

The Everything Store: Jeff Bezos and the Age of Ama …