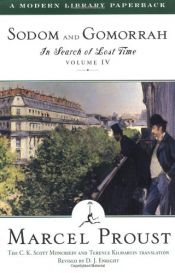 Sodom and Gomorrah opens a new phase of In Search of Lost Time. While watching the pollination of the Duchess de Guermantesâs orchid, the narrator secretly observes a sexual encounter between two men. âFlower and plant have no conscious will,â Samuel Beckett wrote of Proustâs representation of sexuality. âThey are shameless, exposing their genitals. And so in a sense are Proustâs men and women . . . shameless. There is no question of right and wrong.â