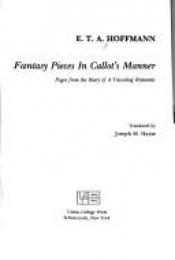 Among the many works in the Romantic ground-swell that marked a transformation of the artistic imagination, none is more fascinating or more revealing than a remarkable collection of prose published anonymously in 1814. The sole credit of authorship rested in the subtitle, Blatter aus dem Tagebuche eines reisenden Enthusiasten - itself a manifesto-in-miniature of the new Romantic creed. The "Enthusiast" (literally, "one inspired or possessed by a god," a term previously applied in mockery) was E.T.A. Hoffmann, a struggling composer with a history of misadventure in his bureaucratic career; the description of his book as "diary pages" suggested intimate, spontaneous outpourings, unfiltered by art's traditional rules.
The German title, Fantasiestucke in Callots Manier, evokes association with Lehrstucke, what the apprentice offers to prove his command of his craft; "in Callot's Manner" extends this embedded simile by indicating that the contents demonstrate mastery in a certain style - one of the tests of an apprentice. Fantasy Pieces, then, should be regarded not merely as a selection of new and fugitive writings but as a sampler - pointedly derived, moreover, from fantasy, that revolutionary quality raised to pre-eminence by the Romantic artist.
Curiously, no earlier English edition of a complete Fantasy Pieces has appeared, and two of its major tales, "The Recent Adventures of the Dog Berganza" and "The Mesmerist," have never previously been available in English. Hoffmann's Anglophone readers have also been hampered by pared down, stilted, or careless renderings.
Joseph Hayse's translation, painstakingly accurate in the face of syntactical difficulties, conveys the flavor of Hoffmann's language; the greater effect of his effort, however, lies in presenting Hoffmann's first volume complete. A multifaceted document of an emergent genius, it also illuminates the complex mind of a new age.