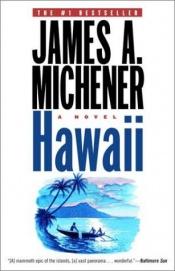 fiction by James A. Michener

Hawaii is a novel by James Michener. Written in episodic format like many of Michener's works, the book narrates the story of the original Hawaiians who sailed to the islands from Bora Bora, the early American missionaries and merchants, and the Chinese and Japanese immigrants who traveled to work and seek their fortunes in Hawaii. The story begins with the creation of the islands themselves at the dawn of time and ends in the mid-1950s. Each section explores the experiences of different groups of arrivals. The point of view changes with each chapter, although as the novel nears its end, these points-of-view change and coalesce rapidly culminating with the "Golden Man", who Michener describes as racially and culturally the result of the millennia of immigration to the islands.
The novel was published in 1959, the same year Hawaii became the 50th U.S. state. The book has been translated into 32 languages.
The historical correctness of the novel is high, although the narrative about the early Polynesian inhabitants is based more on folklore than anthropological and archaeological sources.

Ben-Hur: A Tale of the Christ

Wild Meat and the Bully Burgers