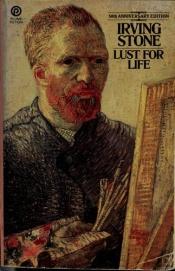 Lust for Life is a biographical novel written by Irving Stone based on the life of the famous Dutch painter, Vincent van Gogh, and his hardships.
It was adapted into a film of the same name starring Kirk Douglas, which was nominated for four Academy Awards, winning one.
It is Stone's first major publication and is largely based on the collection of letters between Vincent van Gogh and his younger brother, art dealer Theo van Gogh. They lay the foundation for most of what is known about the thoughts and beliefs of the artist. Stone conducted a large amount of "on-field" research as is mentioned in the afterword.
Lust for Life is famous for the way it describes the origins of many of Vincent's famous paintings like The Potato Eaters, Sunflowers and others. Stone wanted to explain Van Gogh's difficult life and how he began, flourished, and died as a painter.
The book is separated into nine smaller 'books', titled based on the places he lived: London, the Borinage, Etten, The Hague, Paris, Arles, St. Remy, and Auvers.

Welcome to the world, Baby Girl