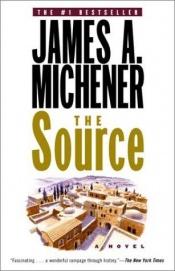 The Source is a historical novel by James A. Michener, first published in 1965. It is a survey of the history of the Jewish people and the land of Israel from pre-monotheistic days to the birth of the modern State of Israel. The Source uses, for its central device, a fictional tell in northern Israel called "Makor". Prosaically, the name comes from a freshwater well just north of Makor, but symbolically it stands for much more, historically and spiritually.
Unlike most Michener novels, this book is not in strict chronological order. A parallel frame story set in Israel in the 1960s supports the historical timeline. Archaeologists digging at the tell at Makor uncover artifacts from each layer, which then serve as the basis for a chapter exploring the lives of the people involved with that artifact. The book follows the story of the Family of Ur from a Stone Age family whose wife begins to believe that there is a supernatural force, which slowly leads us to the beginnings of monotheism. The descendants are not aware of the ancient antecedents revealed to the reader by the all-knowing writer as the story progresses through the Davidic kingdom, Hellenistic times, Roman times, etc.

Gentlemen of the Road