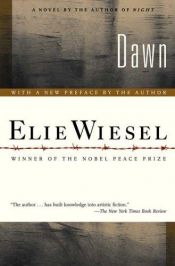 Dawn is a novel by Elie Wiesel, published in 1961. It is the second in a trilogy— Night, Dawn, and Day—describing Wiesel's experiences or thoughts during and after the Holocaust.
Dawn is an original work of fiction. It tells the story of Elisha, a Holocaust survivor. After the war, Elisha moves to the British Mandate of Palestine and joins the Irgun determined to oust the British from the area. One night, he is told he must execute a British officer at dawn. The novel covers his internal struggle leading up to the execution, looking back on his life and those that have affected it.