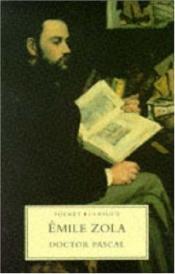 Doctor Pascal is the twentieth and final novel of the Rougon-Macquart series by Émile Zola, first published in June 1893 by Charpentier.
Zola's plan for the Rougon-Macquart novels was to show how heredity and environment worked on the members of one family over the course of the Second Empire. He wraps up his heredity theories in this novel. Le docteur Pascal is furthermore essentially a story about science versus faith. The novel begins in 1872, after the fall of the Second Empire and the end of the reign of Emperor Napoleon III. The title character, Pascal Rougon, is the son of Pierre and Félicité Rougon, whose rise to power in the fictional town of Plassans is detailed in the first novel of the series La fortune des Rougon.