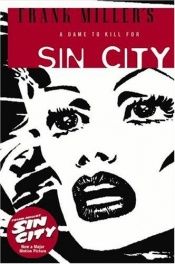 A Dame to Kill For is a comic book limited series first published by Dark Horse Comics in 1993. It is the second story in Frank Miller's Sin City series, and the first to be published in miniseries format. It was written and drawn by Frank Miller. It has since been reprinted in graphic novel format in four separate editions.
The 2014 film, Sin City: A Dame to Kill For is partly based on the graphic novel along with Just Another Saturday Night and two original segments written by Miller for the film. The film received mixed reviews and was a box office failure compared to the positive reception and financial success of the first Sin City film in 2005.

Eyes of the Storm