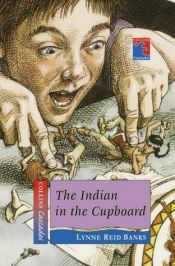 The Indian in the Cupboard is a low fantasy children's novel by the British writer Lynne Reid Banks, published in 1980 with illustrations by Robin Jacques and Brock Cole. It was adapted as a 1995 film.
The original book was followed by four sequels: The Return of the Indian; The Secret of the Indian; The Mystery of the Cupboard; and The Key to the Indian. All were published by Doubleday Books in hardcover, then by Avon Books, now HarperCollins, in paperback. There have been multiple reprints, in various formats, including movie tie-in editions. The publisher recommended reading level is age nine and up.
All the stories revolve around a young boy discovering that when he locks a toy plastic Iroquois Indian in an old bathroom cupboard, the figure comes to life.

The secret of the Indian

The mystery of the cupboard

The return of the Indian

Island of the Blue Dolphins

The key to the Indian

Where the Red Fern Grows