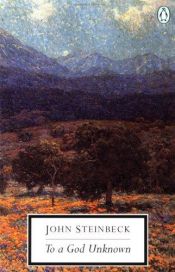 To a God Unknown

Ancient pagan beliefs, the great Greek epics, and the Bible all inform this extraordinary novel by Nobel Prize winner John Steinbeck, which occupied him for more than five difficult years. While fulfilling his dead father’s dream of creating a prosperous farm in California, Joseph Wayne comes to believe that a magnificent tree on the farm embodies his father’s spirit. His brothers and their families share in Joseph’s prosperity, and the farm flourishes—until one brother, frightened by Joseph’s pagan belief, kills the tree, allowing disease and famine to descend on the farm. Set in familiar Steinbeck country, To a God Unknown is a mystical tale, exploring one man’s attempt to control the forces of nature and, ultimately, to understand the ways of God and the forces of the unconscious within. This edition features an introduction and notes by Steinbeck scholar Robert DeMott.