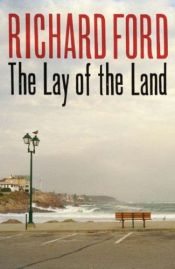 The Lay of the Land is a 2006 novel by American author Richard Ford. The novel is the third in what is now a four part series, preceded by the novels The Sportswriter and Independence Day; and followed by Let Me Be Frank With You, a collection of "long" stories. Each of these books follows a portion of the life of Frank Bascombe, a real estate agent moving through early middle age towards his later years in the aftermath of Hurricane Sandy.
The Lay of the Land was nominated for a 2006 National Book Critics Circle Award.