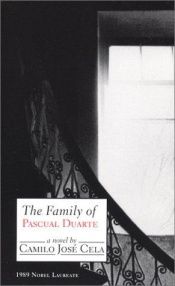 The Family of Pascual Duarte is a 1942 novel written by Spanish Nobel laureate Camilo José Cela. The first two editions created an uproar and in less than a year it was banned. A new Spanish edition was allowed in 1946.
This novel is fundamental to the generation of "tremendismo," which focuses on the treatment of its characters and is marked by extended and frequent violent scenes. In fact, "La Familia de Pascual Duarte" is the first novel of the "tremendismo" style of writing. This novel also contains themes of extreme realism and existentialism. The characters live in the margins of society and their lives are submersed in anguish and pain. The archetype of this theme is found in the protagonist of the novel, Pascual Duarte. He has learned that violence is the only way to solve his problems. The novel has various narrators, the main being Pascual Duarte, who recounts his history in a rural dialect.
The protagonist is from Extremadura and his life unfolds throughout the years of 1882 and 1937, years in which the social and political structures of Spain were marked by extreme instability. This time is one of the most agitated periods of time under the historic Constitution.